We bumped along the red dirt road, just visible under our headlights’ dim blaze. We were looking for a campsite, but the night darkness frustrated our attempts to pick out the smaller, more inconspicuous path we needed to set up shop. Our goal? Find a location that would promise birds to record in the morning. We were in the Western Australian bush, a strange new world for me, to record birds underrepresented in the Macaulay Library.

Even from the start, the unique vocalizations Australian birds produce instilled a sense of wonder. I’ll never forget our second day of recording, when we explored a patch of mulga (Acacia woodland) bursting with cheerful Chiming Wedgebills, rusty Rufous Whistlers, and sapphire Splendid Fairywrens. The wedgebills particularly impressed me. When I woke that morning, the songs of these large, crested, gray songbirds reminded me of a phone alarm. A few hours later I was happily recording one belting out its musical song fewer than fifty feet from me!

We spent much of our time in similar mulga habitat, though not every morning offered such a diverse array of avian opportunities. Some areas we visited had not received rain in months; these woodlands tended to be quieter, with fewer bird species present. We quickly learned to recognize wildflower blooms, which sprouted in response to recent rains, as the telltale sign: the more blooms, the more birds.

One particularly flowery area hosted an impressive number of honeyeaters, thornbills, Red-capped Robins, and other species, including a lone male Australasian Pipit. I enjoyed watching this probable bachelor sit on a rock in the middle of a clearing, leap into the air, and perform his impressive flight display—a repeated undulating flight-and-song duo act hundreds of feet up. After audio recording his antics, I attempted the additional challenge of describing his display in detail. Making voice announcements is an inestimable skill for any recordist, but like anything else it requires practice. This was the perfect opportunity for me to improve my own voice announcements.

Eventually, our hunt for Western Australia’s rarest birds landed us at the southern coast of the state, along which span some of the last refuges of heath. The Western Bristlebird, one of our targets, is a secretive and endangered heath specialist found only in these areas of dense, low, brushy habitat. Amazingly, a bristlebird graced me with point-blank views, letting me appreciate its exquisite mosaic of brown and buff. However, when the bird began loudly singing there in front of me, I felt I had reached an even deeper and fuller understanding of its beauty.

Australia has a way of working its magic if you’re willing to chase down its treasures. The bristlebird taught me that. The lesson was reiterated again at our very last recording location, an expansive eucalyptus forest called Dryandra Woodlands. After parking our large white truck in a promising area, the four of us set out in different directions to record whatever the woodlands had to offer. While I could have played it safe and walked along the road to record, as I sometimes did, I decided to wander straight into the woods. A risky decision in terms of getting lost, but also with a greater potential for reward! When I returned to the truck an hour and a half later, I had recorded the Macaulay Library’s only audio of the Blue-breasted Fairywren, seen and documented a numbat (an endangered marsupial and Western Australia’s animal emblem), and captured the bizarre vocalizations of the aptly-named Restless Flycatcher. Just as importantly, I had become more proficient in the art of navigating unaided through the woods—an invaluable field skill and one I will use for years to come.

Without a doubt, all of our adventures, including those in Dryandra Woodlands, taught me what it looks like to be “street-smart” in the field (field-smart?). How to keep track of where you’re 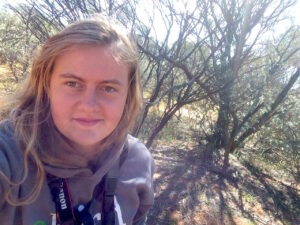 going and where you’ve been in the woods; how to be patient when dealing with uncooperative species like the Western Bristlebird; how to carefully document; how to make mental notes of things like habitat, even if it’s simply noticing the number of flowers; and how to find a campsite in a pitch-black, alien world. Overcoming each of these challenges helped me grasp what it means to be a proficient, careful, and sensitive field ornithologist. For an undergraduate like myself, this expedition gave me real-world knowledge I could scarcely have learned without playing in the sandbox in the land of red dirt.